Bearden’s opponent for the school’s eighth ever state tournament appearance has been set.

The Bulldogs (22-9) will face Independence (23-10) next Wednesday at 11 a.m. EST in Murfreesboro for their quarterfinal game.

The winner of that game will advance to the state semifinals, facing the winner of Southwind and Oakland next Friday at 11 a.m. EST.

Independence comes out of District 11-AAA and made it to the state tournament by way of winning the District 11 tournament championship, winning the Region 6 tournament, and then beating their sectional opponent, Mt. Juliet, at home.

Currently, the Eagles have won 12 games in a row dating back to Jan. 27.

The two schools share just one common opponent this season, both having faced Grace Christian in November. The Bulldogs beat Grace Christian by nine points, and the Eagles won their game by five points.

The full Class AAA state tournament bracket is below. 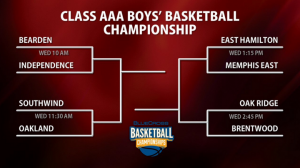